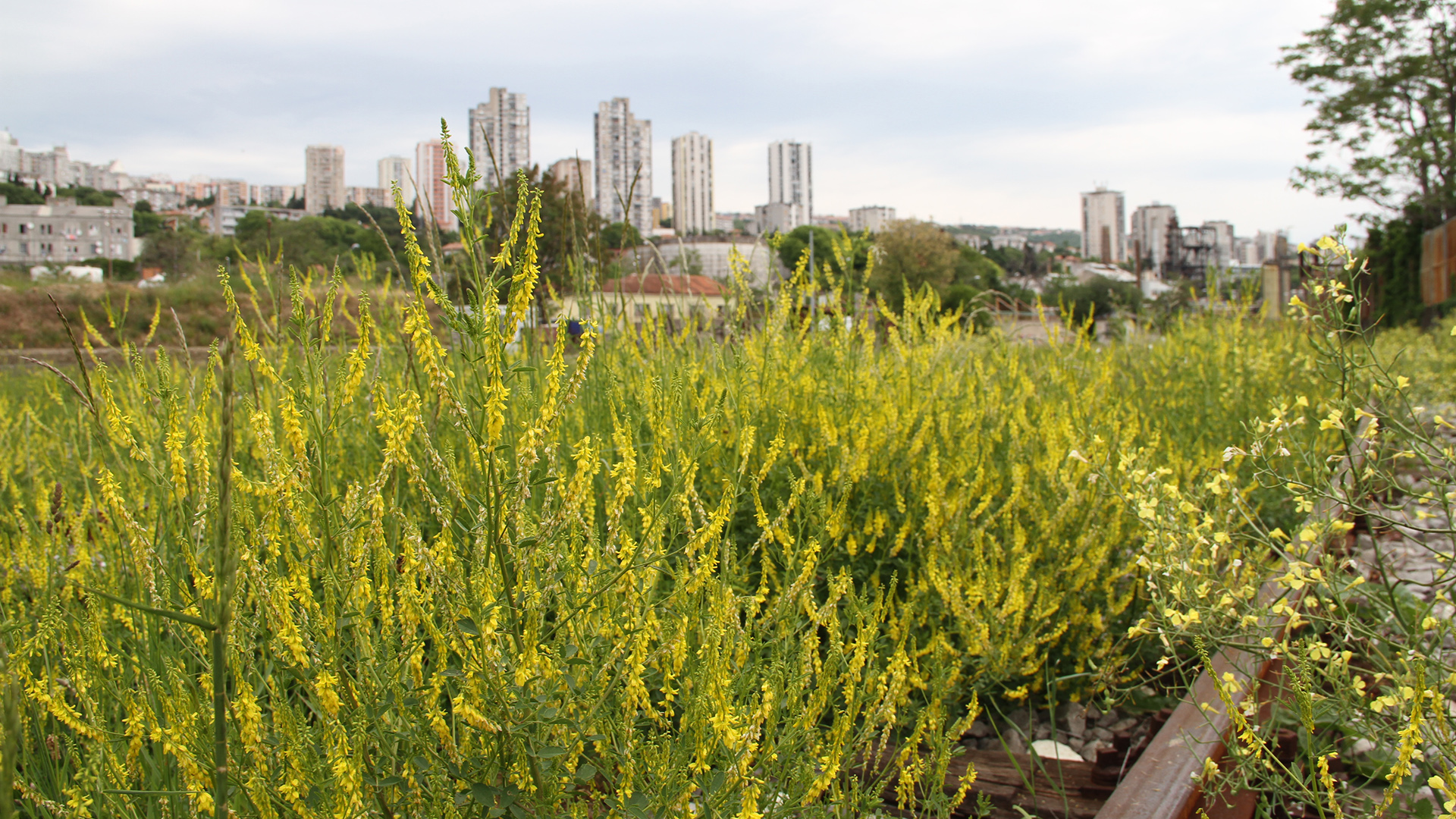 Do Plants Dream of the Future?

Dopolavoro – Behind the Scenes presents stories about the origin and development of selected art projects and artworks created within Dopolavoro flagship of the Rijeka 2020 – European Capital of Culture project.

In the research phase for the exhibition Do Plants Dream of the Future? – which will be presented from June 25 to July 24 – Rijeka-based artist of world renown, Igor Eškinja, collaborated with biologist Dr. Boštjan Surina from the Natural History Museum of Rijeka, in order to get acquainted from the scientific point of view with the vast flora that inhabits Rijeka’s urban space.

Most often we see these plants as mere bushes, monotonous grass – an uninteresting weed that inhabits abandoned premises of once thriving industrial parts of town. But is it so simple?

Just as the inhabitants of Rijeka are largely descendants of workers who once came here from various parts of Croatia and Yugoslavia to work in the newly built industrial halls, these spaces became a home to plant settlers whose ancestors in various ways migrated from the Middle East, Asian steppes, Japanese islands or Atlantic coast of North America. They took over the places that were crucial for the creation of our city, whose factories, warehouses and port ports enabled the development of Rijeka and shaped it into the urban environment as we know it today.

Although mostly abandoned by people or deprived of their former function, these spaces flourish with life that we seem to fail to experience.

Find out what the urban landscape of Rijeka looks like in the eyes of biologists and botanists in short stories prepared for this occasion by Boštjan Surina.

Located in the very center of Rijeka, Školjić is a refuge for the autochthonous Liburnian flora. From the crevices of the rocks of the nearby limestone cliffs, the walls are inhabited by the largest bellflower in our flora – the chimney bellflower. Its appearance is not only pleasing to the human eye, but is also of vital importance for a particular species of solitary bee (Melitta tomentosa Friese, 1900), which was first scientifically recognized in Školjić, 220 years ago.

Rijeka’s urban flora comes from all over the world. Mulberry, for example, came from Asia and in our region is a highly invasive species that perfectly adapts in cities where it tolerates drought well. It grows very fast, so it is already building real forest stands near Bakar. The plant got its Latin genus name in honor of the French naturalist P. M. A. Broussonet (1761-1807), while the adjective papyrifer, relating to the species, denotes plants used in paper production!

In nature, unlike man-made societies, there are no laws of ethics and morality, but a struggle for survival with different strategies on how to continue a particular evolutionary story. This annual ragweed, originally from North America, usually overcomes the native flora only in habitats that have been changed by man, so it usually feels good in cities. Its strategy is very clear: a short but sweet life, or, the first one gets the girl. Since the large amounts of pollen it produces are carried away by the wind, in late summer it causes allergic reactions in some people.

Plane trees are plants that like wetland habitats, so it is not uncommon to find them in the Balkans, where they are very rare in nature and thrive in river valleys. This applies primarily to the oriental plane (Platanus orientalis L.), while in our cities, garden-grown specimens (P. x acerifolia) are planted, which are hybrids between the above-mentioned “eastern” and “western” (P. occidentalis L.) plane, which naturally inhabits the Atlantic part of North America. Botanists believe that the natural creation of hybrids, which are often sterile, is one of the most important processes in the formation of new plant species. There are young trees on Brajdica that have undoubtedly sprouted from the seeds. What species will these trees grow into?

Although the smoketree is a symbol of coastal karst, in locally warmer habitats it often penetrates deep into the interior of the continent, so it is also common in the sunlit cracks of the cliffs above the Kupa river. People like to plant it in gardens, although these transplanted specimens often “escape” and grow in height. In autumn, their leaves do not turn bright red, as is usually the case with specimens in nature. However, the specimens on Delta did not come from the surrounding gardens, but from the Rječina canyon, which naturally connects Delta and the nature of the Rijeka hinterland.

Nikola Host (1761-1834) was the personal physician of the Austrian Emperor Francis II. (1768-1835), but was better known in the world as a botanist. The host (from a nerby village of Hosti!), Described in his Synopsis plantarum in Austria or Austriacorum Icones et escriptiones graminum (in 4 volumes!) numerous plant species from our region new to science, which were actually procured to him by his cousin, Josip Host (1755-1836). This is how this particular savory got its place in botanical science.

Rijeka is not only a city open to people, but also … plants, including this extremely invasive species of buckwheat originating from Central Asia, which people like to grow in gardens because of its decorative flowers.

Hanging purple flowers of this climber, which are rich in nectar and attract many species of solitary bees, are a common occurrence on the pergolas of Rijeka gardens. Specimens often escape and in some cases can cover large areas inhabited by native vegetation. For example, it completely covered the trees opposite the Novi list building.

Paulownia is one of the fastest growing species of trees and because of its decorative nature, it is often planted in coastal cities. It excellently tolerates polluted air and different types of soil. Seedlings often sprout from small cracks in rocks, walls and sidewalks. It often conquers space first, so we say it is a pioneer.

This annual plant, native to the Middle East, is adapted to dry and warm conditions that suit it in coastal cities. Similar to it’s English name “puncture vine“, in Croatian it is called “babin zub”, which tranlates as “grandma’s tooth”, referring to the teeth found on the small woody fruit which easily penetrate surfaces such as the bare feet. These small teeth could also puncture the tires on bicycles, but we should not be afraid of that, since rare specimens are hidden in the recesses of the rails.

In general, certain species of figs live in tropical areas in very specific interrelationships with different species of wasps that pollinate tiny flowers within the fruits themselves. Most often, the previous fertilization of ova with pollen, which thanks to these wasps ends on the pistil of the flower, is the impetus for the beginning of the development of the fruit itself. The fruit also develops in our figs, although wasps, which would initiate fruit development by pollinating flowers, do not live in our region, so our fig is special in that the seeds of individual flowers develop even without prior pollination or fertilization.

Igor Eškinja lives and works in Rijeka. He constructs his architectonics of perception as ensembles of modesty and elegance. The artist “performs” the objects and situations, catching them in their intimate and silent transition from two-dimensional to three-dimensional formal appearance. Using simple, inexpensive materials, such as adhesive tape or electric cables and unraveling them with extreme precision and mathematical exactitude within strict spatial parameters, Eškinja defines another quality that goes beyond physical aspects and enters the registers of the imaginative and the imperceptible. The simplicity of form is an aesthetic quality that opens up a possibility for manipulating a meaning. It derives, as the artist states, from the need for one form to contain various meanings and levels of reading within itself. The tension between multiplicity and void constitutes one of the most important aspects of Eškinja’s mural “drawings” and seemingly flat installations. A void is still an active space of perception; it does not conceal; it comments on the regime of visibility, it invites the viewer to participate in the construction of an imaginary volume in an open space. The temporary nature of the artist’s spatial structures and the ephemeral quality of his carpets (where ornaments are carefully woven out of dust or ash) manifest a resistance to the dominant narratives of institutional apparatus and socio-political order. Igor Eškinja studied painting at the Accademia di Belle Arti in Venice. He has been exhibiting in various venues since 2000. Among them, Manifesta 7, Italy (2008); 28 Grafični Biennale, Ljubliana (2009); Dirt, at Wellcome Foundation, London (2011), Rearview Mirror, at Power Plant Gallery , Toronto (2011), Inhabitants of generic places, at Kunstforum, Austria; at Museum of Contemporary Art, Zagreb in 2011. He was on show with Swept Away at Museum of Art and Design, in 2012 in New York. He took part in the 2nd Ural Industrial Biennial of Contemporary Art, in Ekaterinburg, Russia (2012). He took part in 8 ways to overcome space and time, Muzej servicemen umetnosti, Belgrade (2013). Moreover, his show was on display at Casino Luxembourg - Forum d’Art Contemporain, Luxembourg; MAC/Val, Musée d’Art Contemporain du Val-de-Marne, France; Federico Luger Gallery, Milan Italy; ADN Galeria, Barcelona, Spain; Marta Herford; Centro de Arte Caja de Burgos; FRAC Pays de la Loire, France, Museum Of Contemporary Art, Zagreb, Croatia, among others. Recently, his work was on show in frei_raum Q21 (Vienna, Austria), at Sariev Contemporary (Plovdiv, Bulgaria), Studio La Città (Verona, Italy), and SC Gallery (Zagreb, Croatia).