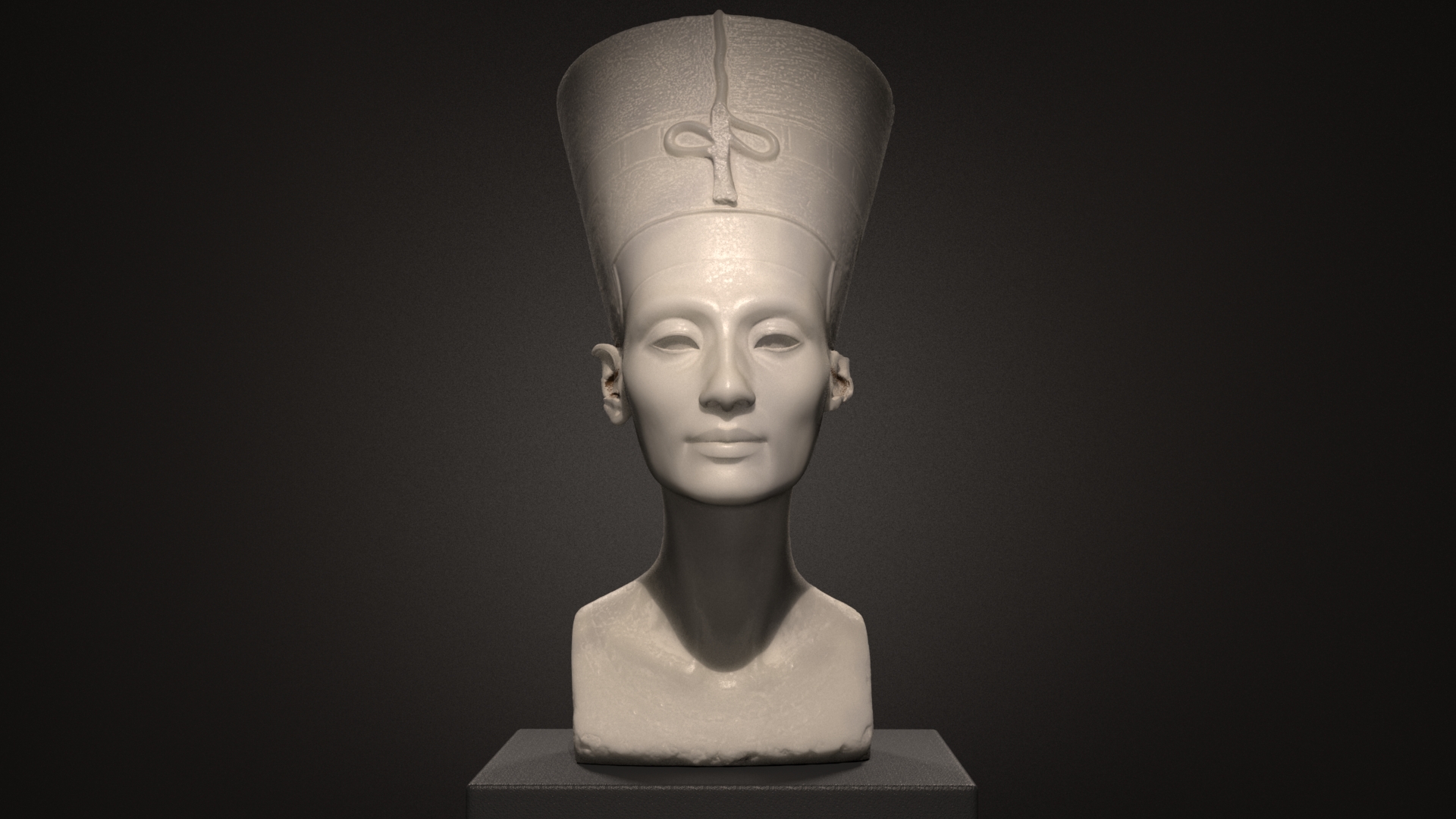 The Other Nefertiti END_OF_DOCUMENT_TOKEN_TO_BE_REPLACED
Artist talk
Thursday, 5 October 2017, at 20:00h

The Other Nefertiti is an artistic intervention by German artists Nora Al-Badri and Jan Nikolai Nelles. In August 2015, they scanned the head of Nefertiti clandestinely in the Neues Museum Berlin without permission of the Museum, by wearing a modified Kinect under a scarf; then they handed the files to an anonymous group of hackers that worked on them and gave them back an high quality .stl file, that they made available on their website as a torrent file under a Creative Commons Licence.

In the large hall of Filodrammatica (Korzo 28, first floor) on Thursday, October 5th 2017, at 20h, the artists will discuss the role and relevance of the museums as a space of constant negotiation, their inherent fiction and colonial patina and the aspects of the digital in decolonization. They will also talk about their work and its implications of the so called Nefertiti Hack and lay out why the discussion about the politics of representation, originality and truth of data is necessary and why there is such an institutional Angst to open up the collections as cultural commons and on a public domain.

«With the data leak as a part of this counter narrative we want to activate the artefact, to inspire a critical re-assessment of today’s conditions and to overcome the colonial notion of possession in Germany»

In November 2015, with the help of the Goethe Institute, the artists brought some 3D printed copies of the artwork to Egypt, and exhibited them as part of the OFF Biennale Cairo. The event marked a symbolic return of the iconic sculpture to the place where it was excavated and stolen by German archeologists, an hundred years later. The project became part of a larger cultural debate after December 2015, when it was presented at the Chaos Communication Congress in Hamburg, Germany. The story was covered by online news media such as the New Stateman, The New York Times, and Hyperallergic, and raised questions about the notion of belonging and possession of objects of other cultures, copyright and control over the use of historical artifacts.

The bust of Nefertiti was found in Akhetaten (present-day Amarna) in 1912, was brought to Germany and became part of the collection of the Neues Museum before WWII. Although Egypt would like to bring the sculpture back, Germany has repeatedly refused. Although the Neues Museum made its own high quality 3D scan for archiving and preservation purposes, and even produced an expensive, limited edition copy of the artwork out of it for merchandising, visitors are even prevented from taking photos.

However, the museum didn’t report the artists pretending that their copy wasn’t good enough; while, on the other side, 3D experts declared the project an hoax, saying that the copy is too good to have been produced in the way the artists declare. Paradoxically, the debate shifted from the theft of an original to the originality of the copy.

All considered, The Other Nefertiti is a strong take on the potential of digital technologies such as 3D scanning to “reactivate” artworks buried in museum collections, by making them available in the public domain: an effort that can be compared to that of other artists, such as Oliver Laric and Moreshin Allahyari (who scanned and made publicly available artworks destroyed by the ISIS); and of a few museums, like the Art Institute of Chicago, the Met and the British Museum, which encourage visitors to scan objects in their collections.

Al-Badri and Nelles are coming to Rijeka in the framework of State Machines, and will also be presenting their work at The Other Nefertiti exhibition in Aksioma Project Space (Komenskega 18, Ljubljana) from 4 October to 3 November 2017.

Nora Al-Badri and Jan Nikolai Nelles are Berlin-based artists that have been collaborating as a collective since 2009. Their works got granted by several institutions like Goethe-Institut, Institut für Auslandsbeziehungen (IfA), German Federal Foreign Office and European Cultural Foundation (ECF). Al-Badri’s practice incorporates interventions and different mediums such as sculpture and installation, photography and film. Her pieces deal with issues arising through hegemonic and neocolonial power structures and representations between the Global South and North as well as with the various faces of war. She studied political sciences at Johann Wolfgang Goethe University in Frankfurt/Main and visual communications at Offenbach University of Art and Design. Nelles’s artistic practise reflects on the absurdity of the human conditions. His work interferes in social infrastructures by misbehaviour performances or challenges institutions by civil disobedience. He reclaims a critical revaluation of actual cultural commons and heritage. He graduated from Offenbach University of Art and Design in 2011. In the past he founded an independent ‘project space’ in Frankfurt/Main, Germany, and co-founded a photography magazine.

← PREVIOUS
NEXT →
organizers:
Drugo more
Supported by:
European Commission program Creative Europe, Kultura nova Foundation, City of Rijeka – Department of Culture, Ministry of Culture of the Republic of Croatia, Primorsko-goranska County, Croatian Government Office for Cooperation with NGOs
This program is realized in the framework of State Machines, a joint project by Aksioma (SI), Drugo more (HR), Furtherfield (UK), Institute of Network Cultures (NL) and NeMe (CY).
This project has been funded with support from the European Commission. This communication reflects the views only of the author, and the Commission cannot be held responsible for any use which may be made of the information contained therein.
This program is realized in the framework of Refleks program.
Drugo-more.hr koristi kolačiće (cookies) kako bi poboljšao funkcionalnost stranice.Slažem seViše informacija